24.01.2023: What in 2020 was still considered a vision of large-scale and nature-friendly solar power generation in combination with agricultural use of the same area was successfully put into practice on 10 November 2022 with the commissioning of the Agri-PV pilot plant EWS Sonnenfeld in Bruck an der Leitha. 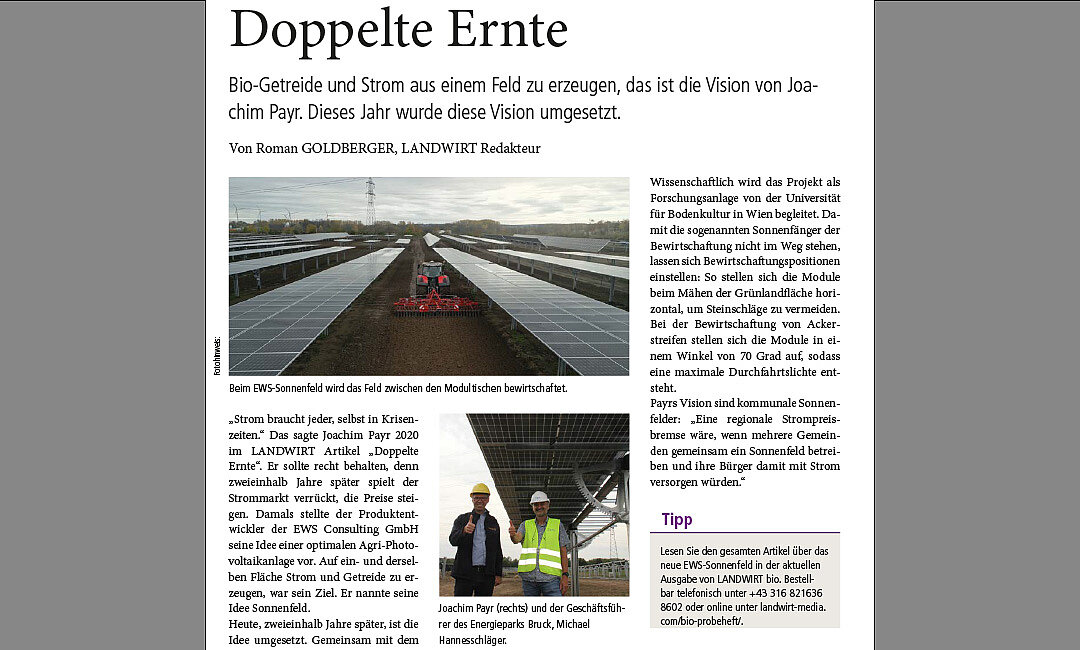 Since then, the 5.5 ha solar field with a capacity of 3.03 MWp, which is 60% owned by Energiepark Bruck/Leitha GmbH and 40% by EWS Consulting GmbH and supported by the Climate and Energy Fund, has been producing green electricity in Lower Austria.

In autumn 2022, the flowering strip, poppy and winter wheat were also sown. All other crops, including potatoes, will be planted in March/April of this year. The mechanical cultivation between the module table rows works without any problems.

On 11.01.2023, the lighthouse project was awarded the Innovation Prize of the Lower Austrian provincial government.

A communal solar field for every second community in Austria

Joachim Payr, GS of EWS and product developer of EWS Sonnenfeld®, already has another vision in mind with the municipal Sonnenfeld. This can not only bring more energy supply security and added value for the municipalities, but also ensure favourable and constant electricity prices through well-planned citizen participation models: "A regional electricity price brake would be if several municipalities operated a solar field together and supplied their citizens with electricity."

With 1,000 agri-PV systems and an actual land consumption of only 2% for technology and system anchoring, 17% of Austria's total electricity consumption could be covered. Read more about this in this news article.

In Upper Austria, several EWS solar fields are currently under development. The municipalities of Höhnhart, Mining, Pischelsdorf am Engelbach, Rohrbach-Berg, Schardenberg and St. Veit im Innkreis have already initiated the dedications for some time. The ball for starting the further approval procedures as a basis for implementation now lies with the Upper Austrian provincial authorities or the basic political framework conditions for this.

"We welcome the fact that Governor Stelzer has declared climate protection to be a top priority and are counting on the turbo for the expansion of Agri-PV finally being started in Upper Austria as well," says Joachim Payr.

You can read the entire 4-page article about the EWS Sonnenfeld in the current issue of LANDWIRT bio.

Am I ready for hectares of solar power?

An area of at least 5 hectares in size should not be a problem. Will it be suitable for agricultural photovoltaics?
I hope so and will do the "area check"!